This is not intended to be used to diagnose or treat your horse, please contact your Veterinarian.

April has always loved watching horses run and play — if you watch long enough you will notice some move more fluidly than others. Why? 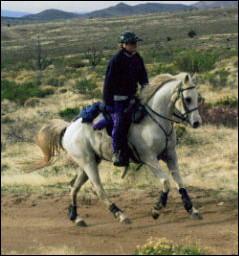 As a trainer of horses, April noticed the horses that were in some kind of discomfort or pain were labeled the ”problem horses,” hard to train and that people were quick to get rid of them. In her training as an equine musculoskeletal release specialist and the development of her signature equine musculoskeletal unwinding, she learned to listen to the horses that came to her for training and worked on the underlying issues. April discovered that often, at the heart of each “trouble horse” that was in pain, there was actually a willing equine partner eager to do what was asked of them.

When April was introduced to endurance riding, she discovered a new aspect to physical challenges faced by horses. As she thrilled to riding a willing partner that worked hard–truly, an equine athlete–small things could start a painful ball rolling. For instance, a spasm in the hind end would cause the front of the horse to have to pull harder. She noticed that the horse started to compensate, resulting in a ripple effect. As April committed to sleuthing for the source, educating herself as an equine kinesiology specialist, and resolving the issue at its origin, the rest of the horse came back into balance. The true equine athlete was restored, able to use 100% of his body again. 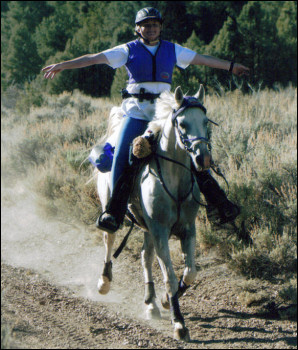 As an equine musculoskeletal release specialist, April knew that she was asking a lot of her athletic equine partners and became determined to support and help them realize their maximum potential by taking care of their bodies in a holistic way. The success of this approach has been seen in the results she has experienced with her horses and in the lives of clients she has been privileged to help as well.

Any athlete in balance will perform better, faster and longer without compensatory break-down or arthritic changes. Never being content to let things just take their course, April began to ask questions about the movement of horses she witnessed. Why is the suspensory or tendon sore? Why is the horse loading that front leg? Why are the hocks sore? Why are they working twice as hard as they should be? What in the front end is not able to move freely, inducing the hind end to work even harder to pick up the front end? 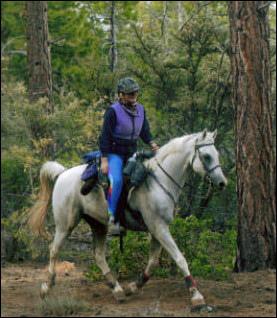 April became driven to find out the answers to the ”why’s” of injuries that often sidelined horses that should have been at their peak, continuing to perform but who were, instead laid up in recovery.

When asked about her own horses over the years, April tells of a gelding that she fell in love with who had a great mind but was not physically the best candidate for long distance riding. She was told he would never make it in the sport of endurance riding — that he would never hold up to the rigors of long demanding miles. That was years ago and Tikis Firstknight and April are still going strong!

In 2007, Tiki and April placed third in the American Endurance Ride Conference (AERC) West Region Heavyweight Division with 955 miles in one year, including an impressive streak of 28 consecutive completions in just 16 months of 50 miles or more in a day.

In 2008 they continued with more success — April and Tiki were high in the AERC standings with 855 miles as of the end of September. Remarkably, Tiki has had only one Rider Option pull in 40 rides and has completed over 2,000 miles total in just over two years. The pair harmoniously flowed together down the endurance trails through mountains, boulders, river crossings, and even steep narrow trails with severe dropoffs. Today at nearly 20 years-old, Tiki is fluid and is still in harmony with his rider. He greatly appreciates all the time and money that April spent on classes to learn how to best take care of him!

Email April or call her at 530-823-7321 to learn more about her work as an equine kinesiology specialist.